I bought a Football Club? Maybe Google and Yahoo will follow

I just bought my own Football Club. Well actually I just paid my £35 to sign up for a share of the investment fund with Myfootball Club.

50,000 members have registered and now the funds are being raised through the £35 subscription. I have no idea if this is the biggest waste of my hard earned £35 and the Web project seems to bring up more problems every time I think about it.

I loved playing Football Manager when I was a kid and have always enjoyed the fantasy football competitions in the newspapers, even when I was in them. All the Professional players would wait with anticipation as the newspapers rolled out their listings of players for the upcoming season. Seeing your name in the paper with a valuation of £3,000,000 is very exciting.

Football Clubs constantly battle to stay in close contact with their fans. Pooling a group of people together on the internet with the only common interest being to buy a football club is hardly a well worked business plan. There is no loyalty to the particular team, no history with the club and it will be difficult to make this a success.

Lee Power, the Chairman of Conference side Cambridge United said :

"It's just not workable to have 53,000 fans make decisions on behalf of a club," he said. "Most will have allegiances to other clubs. What's to stop our rivals from buying a significant stake in our club, and acting with vested interests?"

Good point. If your other team, the one that holds your heart-strings is playing the internet club, are you going to influence the selection of the side to the detriment of the teams performance?

"You can't just whisk up genuine commitment by charging £35," he said. "Fifty-three thousand new fans would be great, but are these people going to buy football kits, match programmes, hot dogs? That's what a club needs, not internet voting."

Barry Hearns thoughts on the project were equally downbeat :

"The idea is totally impractical," said Mr Hearn. "One-and-a-half million won't get you far in football these days."

"As far as I'm concerned, when you're running a football club, the ideal size of the ruling committee is one. I don't buy this mass voting nonsense; democracy and football don't mix."

Although this is an unusual idea, sports clubs are always looking for new ideas to rise above the opposition. Tech savvy supporters may just jump on board this idea. In Silicon Valley, regular rounds of fund raising for yet to be proved websites easily raise £10s of millions.

Don't believe me. Business.com recently sold for £170,000,000. It is hardly a great website and surely not as interesting as owning your own Football Team.

Google to buy a Football Club?

Football Clubs have been bought up by wealthy investors and Global Branding in Football is a vital part of creating success if you are one of the biggest clubs.

The internet can bridge this global gap instantly. Maybe Will Brooks, owner of the site has in mind bigger fish and will hawk his idea around the corridors of Silicon valley. Google or Yahoo could buy their own football club. In fact if the website can attract 10,000s of visitors every day (as it surely will if there are 50,000 members all checking in to vote on the team for saturday and discuss their ideas for the club), then Brooks will have turned a fun project into a goldmine.

Football skills and tricks from around the world (video)

I have just been reading an interesting bloggers conundrum put out by Frankie Valley, a Charlton Athletic Blogger.

"football management is 1% perspiration, 1% inspiration, and 98% luck. You can put the same team out every week, sometimes it works and sometimes it doesn't. You could make the same changes at half-time every week, and get a completely different effect every time you try it"

It's an interesting argument and one that has received much feedback.

Here is my take based upon how I felt going into matches and what I saw at Professional Football Clubs.

By the time match day arrives, 95% of the preparation has been made for the game. The manager and his coaching staff have completed 95% of the work necessary to get the result.

Players have been prepared during the week, told their duties. The manager has done most of his work in the run up to the game. He has studied the opposition on tapes, watched live games, spoken to all his players who will participate in the match and advised them of anything to be expected or to specifically look out for on the day of the game.

What this means is that EVERY player in the team will have been told what to expect on the day of the game. Defenders will be advised how opposition attackers play, what parts of the field they occupy, the goalkeeper will try and study the oppositions penalty takers routine and try and figure where he will place the ball. In the event that the opposition has a Beckham in their midst, the manager and coaches will devise some kind of plan to protect the goal at free-kicks.

The pre-game build up during the week will also include ensuring the players are at the height of their fitness. This should include not draining the players energy too much during the training sessions before the game. If the team has travelled a long distance for an away game then the managers job is to make sure that he has allowed the players enough time to loosen up for the game. For example, after sitting on a coach for 7 hours on a Friday afternoon, travelling from London to Newcastle, players will be very stiff. Therefore a small training session is required to get this out of the players systems.

Another part of the preparation and vital part of a teams success is ensuring the manager has as many of his players available to him for selection. This means sensible management throughout the season so that he can pick his best team. No person personifies this more than Sam Allardyce, now at Newcastle United. Whilst at Bolton, Allardyce lost only 72 player days to injury, compared to an astonishing 340 days lost at Newcastle last season. It does not take an Einstein to figure out that more injuries to more players equals a poorer match day performance.

By the time Saturday arrives, I think that as Frankie says (and as my dad has insisted for many years) results can go many ways and any tom, dick or harry could make the team decisions. I agree. I think that this is very true because the nature of a football match is that there a million and one variables and no manager or computer can figure out how the result will go.

None of the above is done on a Saturday. It's all done beforehand. So I would say that football management is :

If Pardew fails to deliver for Charlton this year it will be based around his ability or inability to get the best players out on the field in the peak of their physical condition and at the peak of their abilities. If he gets this right then the rest falls into place.
Posted by Andy Hunt at 4:36 AM No comments:

Preparation for the Football Season is vital for the performance of players through the season. This program below shows how I prepared for a return to Professional Football with Charlton after a 2 year lay-off. I followed this program on my own which took a lot of dedication and determination not to give up. Although this does not show how heavy the weights were that I lifted or the intensity and type of running exercises, it does give you an idea of what you need to build your stamina, sharpness and ball skills.

After the completion of this program I was able to fit in comfortably with a Professional teams daily training schedule. The only thing I was a bit short on was match practice at the highest level.

Football Recruiting, the You Tube way

Football stardom is increasingly more difficult to reach so you have to applaud any creative way to get noticed and then recruited by the Professional Scouts and Football Clubs. I became a Professional Footballer at the ripe old age of 20, eking out my path through the amateur Football Leagues.

Rhain Davis from, Brisbane, Australia has been spotted after his family put this video on You tube. He was spotted by Manchester United and is now under their guidance.

What a great player. Very gifted and looks so comfortable with the Football at his feet. Good Luck to the boy and congratulations to his family for their creative use of modern technology to further their boys chances of being a Professional Footballer.
Posted by Andy Hunt at 12:29 AM No comments: 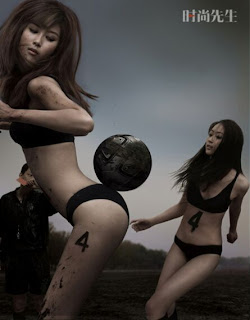 I remember trying many different clever free kicks in training but we were never brave enough to put together some of the moves seen in this video. The timing and skills needed to pull off some of these free kicks is pinpoint and so accurate that you really cannot appreciate them until you have tried it yourself. Not to mention the team work involved and a good dose of luck.
Posted by Andy Hunt at 11:30 AM No comments: 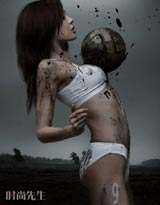